underwater exploration: Maine has an ocean?

Alright, I’ll come right out and ask… Did you know that Barnacles have one of the biggest penises of any animal? no? Well, neither did I, but they do. Relatively speaking of course, the ordinary barnacle that attaches itself to the bottoms of boats, piers, docks, and rocks, has a prehensile penis that is several times its overall length. Why, you ask, do they need such comically oversized penises? well, it’s really quite simple, and this informative blog explains it best…

“The penis of the barnacle is considered one of the largest in the entire animal
kingdom, and allows the animal to simply reach over and fertilize its neighbors. To
add to the convenience, all acorn barnacles are hermaphroditic, so each individual
can both conceive and bear young.”

That’s right, not only is their penis to overall body mass grossly out of balance, but it turns out they have lady parts as well, making every barnacle a baby making, and birthing machine.

In case you don’t believe me (and are too lazy to click the aforementioned link), It looks a little something like this…

All joking aside, I have spent a good portion of today researching these sharp little crustaceans, and am finding out some really interesting things about them, not all of which are childishly penis-related. I had no idea how many barnacle varieties there are. Also, I have often heard people say that they did not know they were even alive, or that they thought they were plants. While I did of course know that they were alive, I had assumed that they were molluscs, like clams or muscles, when in fact they are closer related to crabs and shrimp. The major differences of course being that that they are miniscule, and most barnacles are immobile in their adult phase… Hence the giant penises for “reaching”.

Anyway, I suppose you’re wondering (I know you aren’t) why I have suddenly taken up such a highly focused marine biology hobby. I assure you, it’s art related. Last week, on this very blog,  I mentioned my need to start some new work, both because of a potential show next June, and, more importantly, for my own sanity. Part of my difficulty taking the next step in my own work has to do with trying to figure out the direction to go next. I know that It would be really nice to sell my art, and however much fun my most recent installations were, those are essentially unsellable in any practical sense. In this same discussion, I am trying to wrap my head around my relationship with function and how it can tie into the topics of place and landscape in the future. I really want to pursue some large scale projects like what I was doing up through this past summer, but I think that I need, and want, to explore multiple directions right now. These larger projects will have to be more reliant on funding and planned locations. I can’t just be making work like that right now. So, for now, back to the barnacles.

I’ve always had this fascination with the sea and maritime and nautical cultures. I played with it for a while in graduate school and intended to come back to it. For now, I am studying how to grow, or raise barnacles on surfaces. In particular, I want to create waterlines, just like on a pier or boat hull, or the rocky coast here in Maine. I want to make high water marks of undersea growth on a series of… GASP…  furniture. here is my inspiration…

I have always loved this texture. Growing up we would drag ourselves up out of the water over these sharp buggers and slip down the rocks scraping our knees on them. I have also been exploring this waterline idea for a couple of years now but never implemented it. I love the idea of marking the high tide, or some passage of time and water come and gone. Aesthetically, I love the idea of this line, perfectly level by nature, leaving the mark of time, water, degradation, animal contact, exposure, and submersion all at once. These ubiquitous little guys are so indicative of this coastal life, and I want to capture that sense of tides coming and going, and the ebb and flow of nature and human/animal involvement.

That’s all I’ve got for now on that topic, stay tuned for more. Most likely, stay tuned for a post about how impossible it is to do what I want to do. but, we shall see.

This past week was also thanksgiving, and I went up to Warren where we walked out on the Rockland breakwater on a particularly windy day. As you can see, the structure does just what it is apparently meant to do… 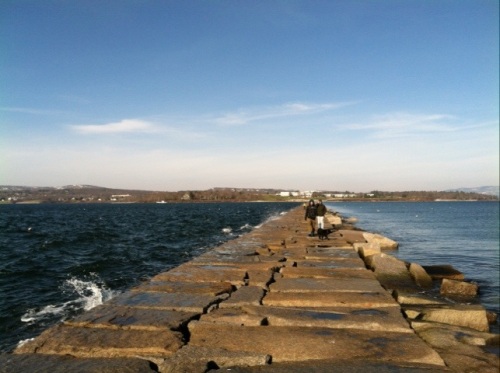 choppy and calm. the theory works.

Finally, there’s one last thing I want to show you before I finish. I am currently teaching two sections of 3D design and, as per the prescribed curriculum, all 40 of my students are working on their final project right now entitled “1000 things”. This is a project (no doubt inspired by Tara Donovan’s installations) that is always taught to MECA’s 3d students, but is one that I find particularly great for students at this stage. The premise, and I took some liberties with this wording, is that the students need to choose an object that they can find in numbers of at least a thousand, and create another object entirely from that which somehow relates, either aesthetically, conceptually, or both, to the initial elements. As a secondary element, they are to choose a display location that further fits into the idea and materials somewhere on the premises.

There are some great ideas and projects coming together so far, and here are a few shots of them at work and their materials. I won’t give away what these things are going to be… I’ll let you guess. Until next time… 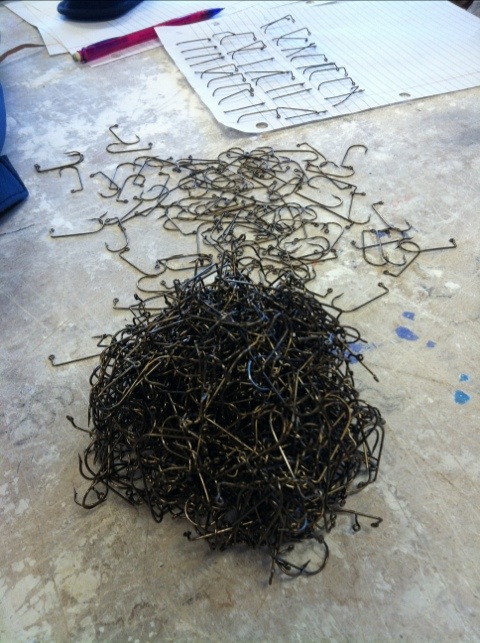 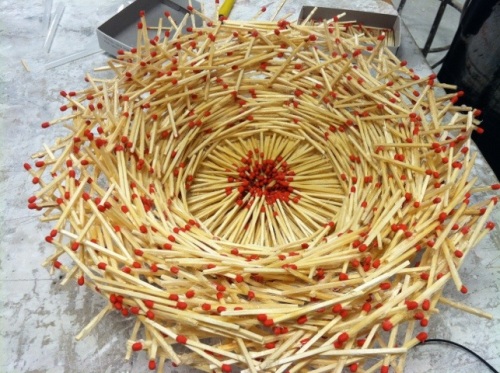 You'll have to wait and find out what this one will be... magical