Regrettably, it has been some time since my last post. I can explain.

With my recent shows and trip to Maine, and then Amertah’s trip to Taiwan (see above return airport photo), there has been a lot of running around lately. However, there is one thing that, for me, has been kind of hanging over the last month or so. After some talks and waiting and such, it seems that Amertah and I will be moving to Portland Maine in the very near future. I have been offered a position at Maine College of Art beginning the upcoming semester, and, pending contract details, It looks like it is the likely outcome. As it is pretty late in the game at this point, it has been a bit stressful thinking about the details of a major move during an already busy summer.

Having said that, I am starting to get really excited about this opportunity. It came as a bit of a shock I must say. since I have had some good showing opportunities here, I had begun to consider the possibility of trying to push my way through the San Diego art scene slowly but surely. So, when this came up it was kind of a strange feeling. I had not really considered that option at this point. Of course, After talking to Matt Hutton (he is the program chair for Furniture and Wood at MECA), and conferring with Wendy and Matt here, it seemed too good a thing to pass up, and so there you have it. Granted, I am not under contract yet but apparently it is in the works.

I won’t lie, after about a year of wondering where the hell I had sent myself, San Diego has grown on me fully. Thinking about leaving is hard for me because I’ve met such great people here and feel like I haven’t even explored all that much. It is one of those bittersweet decisions that was really difficult for me. But, in the magical age of interwebs and cellular telemophones, one is never disconnected from the communities they are a part of. not even when they want to be (I doubt I’m the only one who seethes whenever a former schoolmate posts some idiotic facebook message about Glenn Beck or Jesus). And so it goes. On to the next thing. I think this might be adulthood.

Speaking of which, this has gotten me thinking about that idea: adulthood. At every step since finishing high school, I have thought (and it has been reinforced by “grown ups”) “this is adulthood, now I’m a grown up”. but strangely it has never really felt that way. Graduate school must make you feel like an adult right? instead it breaks you down like a lost child and surrounds you with similarly confused stunned aging children. College certainly deflated my sense of adulthood. It undoubtedly changed me, but at no point did it make me feel particularly together. I don’t suspect that taking a teaching position will make me feel “grown up” either. I think that might be good. Maybe its a myth. I’m still a little scared and excited.

Anyway, with the big news out of the way, I can move on to what else has been happening.

first off, I never reported back on the Americans for the Arts conference that I attended, thanks to a scholarship from Dean Gattus. My interest in attending was primarily for the “pre-conference” which was a public art forum put together by the Public Arts Network (“pan” for short, although I would have called it “PUBARTNET”). This two day event took place at UCSD and the Downtown Hilton, which was where the rest of the conference was located as well. I got quite a bit out of this pre-conference. There were workshops and discussions for artists and administrators at all different levels of involvement in public art. I myself attending the introductory roundtables that were designed for people interested in or just beginning careers in or around public art making. I found the talks informative and encouraging, if perhaps a little elementary. I got the impression that most of the conversations happening were as much to convince potential public artists that, yes, in fact it is possible to pursue a career in public art, but yes, it takes a while to get there and yes, you may have to keep your day job. Some attendees weren’t having that part. Apparently those people missed the “struggling artist” memo. I heard some of the worst art teacher bashing i have ever heard, from a young artist trying to work her way into public art by conveniently skipping the part where she works hard for little return for years. She ruminated aloud about the horrors of artists teaching as some sort of cop-out, and wondered (again aloud of course, why keep thoughts to oneself when there are people around to hear you and see you?) how she could avoid having to do anything but get rich making public art. Again, she must have missed the memo. Thankfully she was answered with a resounding, “keep your day job for now” from the entire panel of accomplished and still struggling artists and administrators.

Of course, the highlight of the pre-conference was getting to tour the Stuart collection. I will now astound you with some selections from said tour… 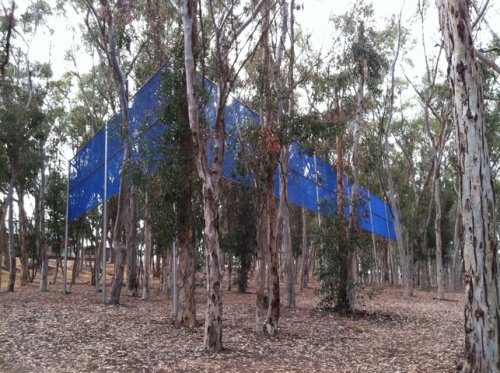 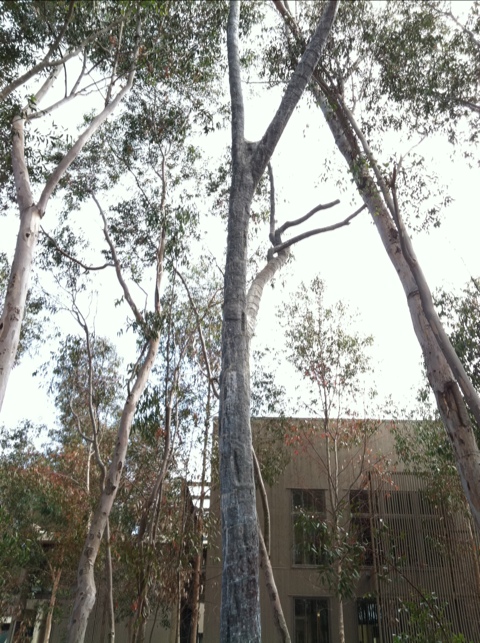 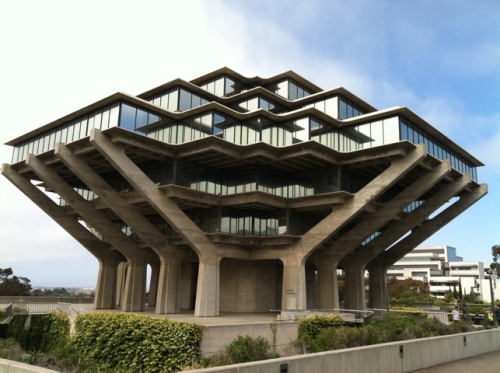 Not a scultpure. UCSD library. amazing 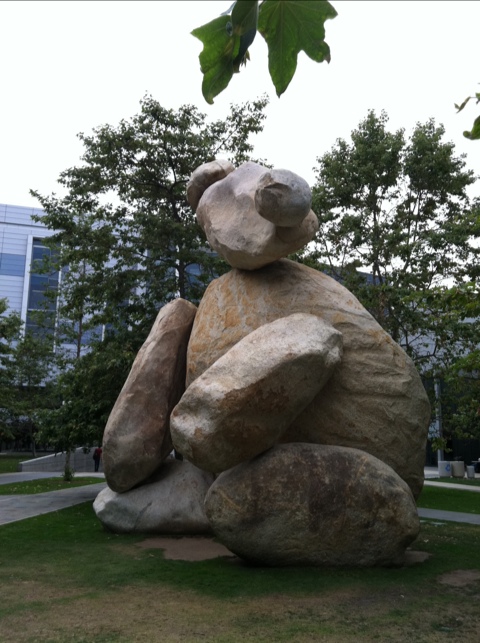 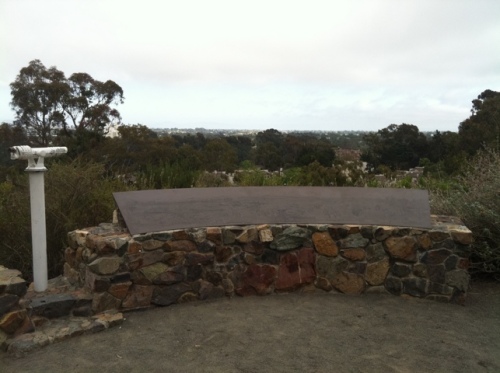 It was great to finally get to see this collection. This William Wegman, above, especially was good for me to see as I’ve been working with these scopes and mapping lately. Richard Keely has been telling me to see this piece for a while now and now I have.

Now, I don’t want to spend much time telling you about the main event of the Americans For the Arts conference because… it was, well, not very good. Let me clarify: as an artist, and recent student, and future potential player in the world of art at some level hopefully, I felt completely left out of the conversation and out of place. It is strange to be a working artist, interested in involvement in communities, education, and the arts in general, and feeling completely out of place at an event that, as far as I’m concerned, is about my world. If I were an institutional or community arts administrator, I may have gained some important knowledge, but I bet not. For the most part, I saw rooms full of people who “support” the arts, talking about artists and arts communities as if they were some abstract theory. Statistics and forecasts on arts involvement defined in large part by attendance at operas and traditional theater events made up the bulk of this event.

I don’t want to sound too negative here but i got the sense that 70 percent of the people at this conference had never actually met or talked to a practicing artist, and instead had spent their careers lobbying for some abstract idealistic idea of “the arts” to politicians who had a similar lack of contact with the real world. the other 30 percent however, great folks trying to make the world better for ACTUAL artists. in the real world. those just weren’t the people talking mostly.

Enough about that though, here is this…

amertah playing at the stickley exhibit

apparently, they tore down the entire Aztec Center while I was in Maine

and some of this…

I also recently put in a proposal for the Sculpture Center in Queens. the tiny model looked something like this. the application was pretty rushed so this model was as well but this is part of the proposal. a huge raised map of the water that surrounds the New York city area, as an aqueduct on stilts. 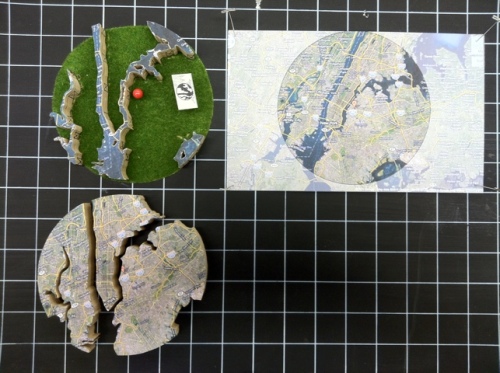 I know, kind of hokey model but fun none the less.

I want to say one last thing before I leave you today. I have decided, upon receipt of several complaints, to end my “Things That Suck, Have Always Sucked, And Will Always Suck” series. It turns out that people can only take so much of my uncensored negativity. that’s ok. I’m a grownup now. I’m so beyond that stuff.

here you go, an inappropriate use of quotation marks… 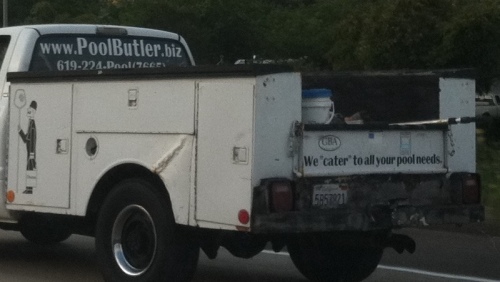 also, please come to my show tonight at Art Produce in North Park… 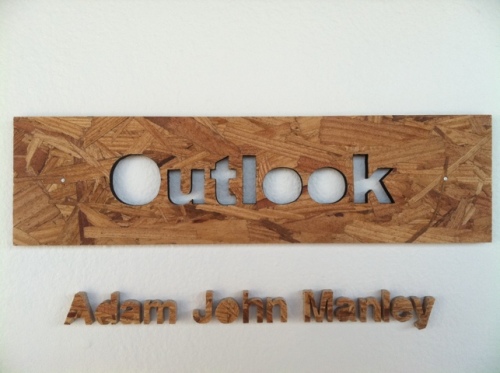 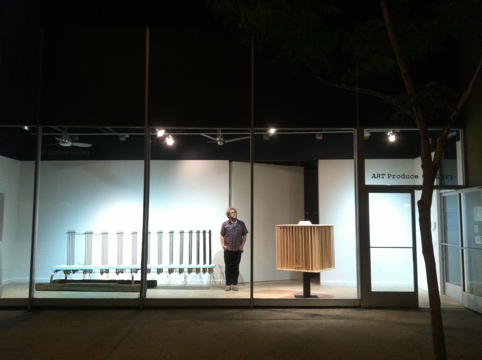 and the setup of the secret installation… 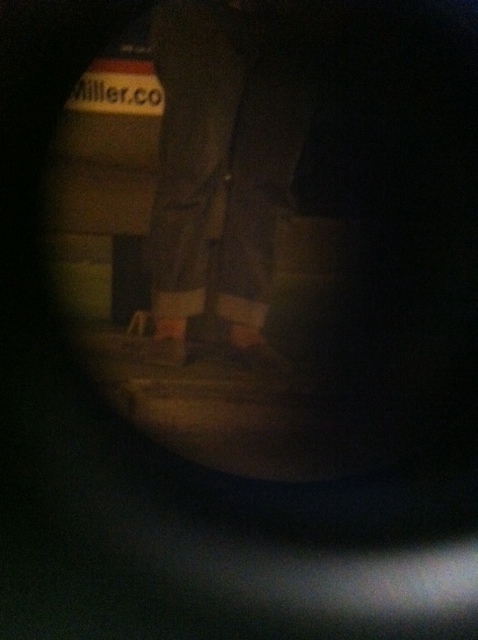 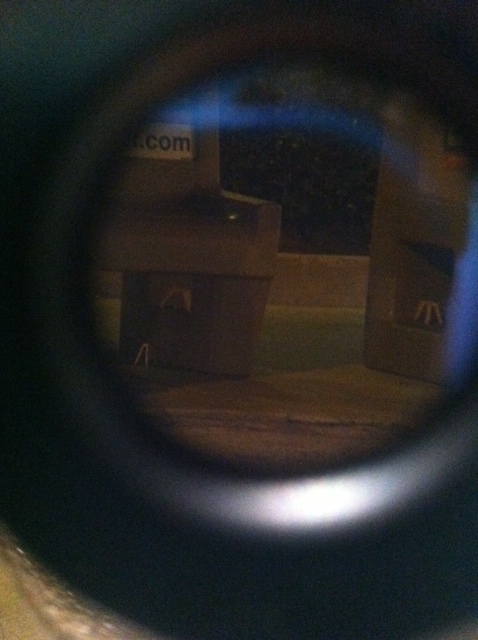